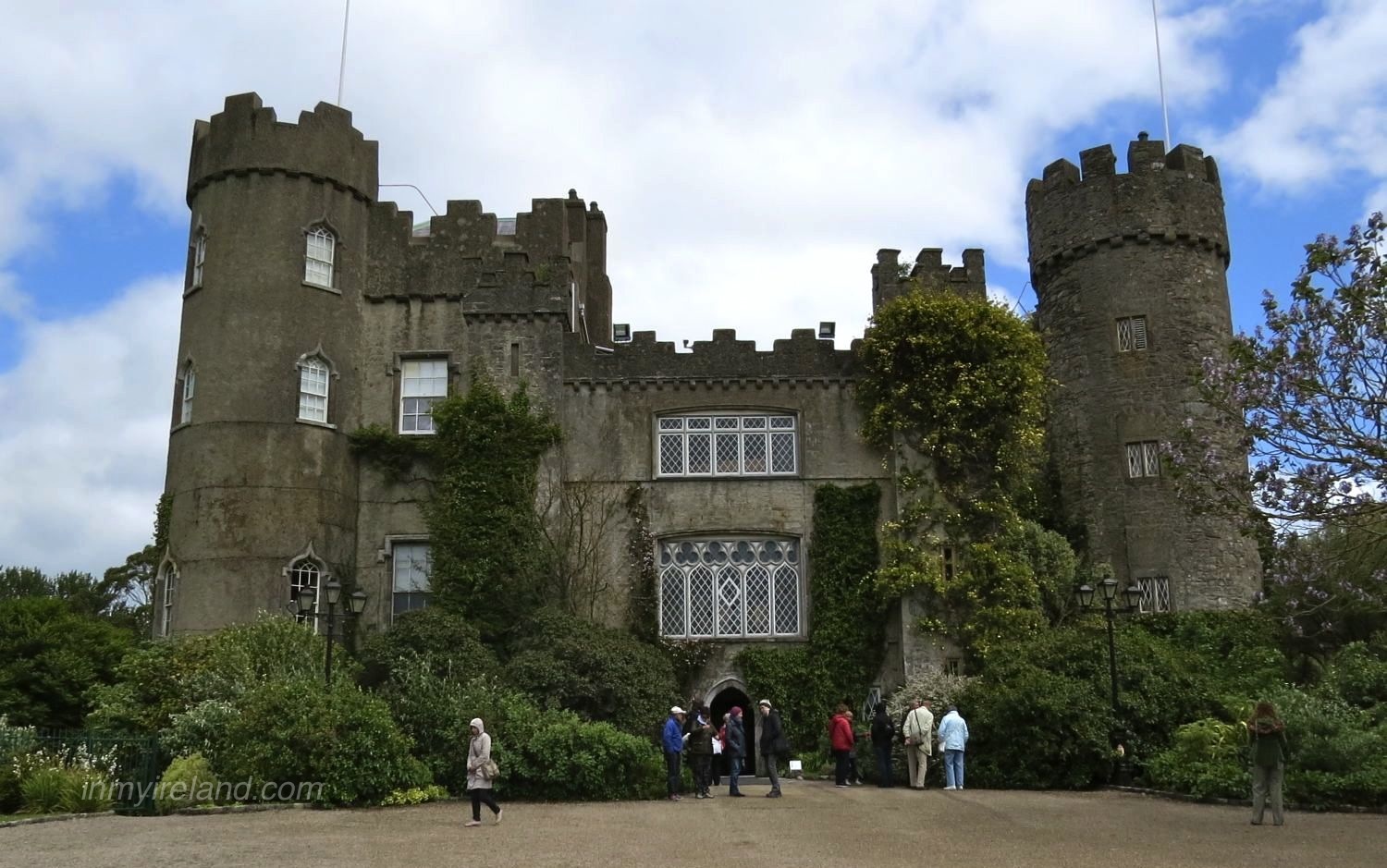 In 1185 King Henry II of England built Malahide castle for his dear friend Sir Richard Talbot in the pretty seaside village of Malahide, Co. Dublin. The castle has been occupied and used as family homes for around 800 years and over that time collected at least 5 known spirit residents and gained a reputation as one of Ireland’s most haunted spots.

The best known of these apparitions would be the former jester, Puck. In the 16th Century the Talbots always had a jester among their retinue of attendants. One of these jesters, “Puck” by name, was also at that time the resident caretaker, his main function when not entertaining to keep watch and sound the alarm in case of attack. He lived in a turret of the Castle, now known as Puck’s Staircase, where he carried out his duties as watchman. According to legend Puck fell in love with a kinswoman of Lady Elenora Fitzgerald, who was detained at the Castle by Henry VIII at the time, because of her rebel tendencies. One December night the jester was found close to the walls of the castle stabbed through the heart, still dressed in his gay jester suit and cap and bells. It is said that before he died he swore an oath that he would haunt the castle until a master reigned who choose a bride from the people, but would harm no one if a male Talbot slept under the roof.

It is said that Pucks spirit continued living on in the castle, appearing at numerous times over the years when the castle was in danger. His dwarfish figure has appeared in a number of photographs taken in the castle and grounds and many a Talbot family letter makes reference to his continued protection of the castle. Puck’s last appearance were reported during the sale of the contents of the Castle in May 1976.

Another resident spirit said to haunt the castle is the spectre of young Lord Galtrim, Sir Walter Hussey, son of the Baron of Galtrim, who in the 15th Century was killed in battle on his wedding day. It is said that Lord Galtrim wanders through the castle at night, groaning and pointing to the spear wound in his side. It is said he haunts the Castle to show his unhappiness towards his immediately widowed bride, who wasted little time marrying Lord Galtrim’s rival after the lord himself lost his life in defence of her honour and happiness.

Lord Galtrim’s widow, Lady Maud Plunkett is said to haunt the castle as well, but as she looked in later years, when she married her third husband, a Lord Chief Justice. During this time she had become notorious as an un-equalled virago, and her ghostly appearances chases her husband through the corridors of the castle.

Another of the castle’s ghosts is that of Miles Corbett, the Roundhead to whom Cromwell gave the castle and property during his protectorate. At the Restoration Miles was relieved of his property and made to pay the penalty of the many crimes he had committed during his occupancy, which included the desecration of the chapel of the old abbey near the castle. He was hanged, drawn and quartered and when his ghost first appears it seems to be a perfectly whole soldier in armour, which then falls into four pieces before the eyes of anyone who has the unpleasant experience of meeting it.

The 5th recorded ghost is that of the unnamed White Lady, of whom a painting hung in the Great Hall of the castle for many years. Nobody appears to know her identity or the identity of the artist who portrayed her. According to legend from time to time she would leave her painting and wander through the castle in the quiet of the night. Many people have reported sightings of this mysterious lady’s ghost.

In the castle grounds is a field known as Our Lady’s Acre, which is also reputed to be haunted. On a few occasions two grey-haired, sad-faced ladies have been seen on the field, wandering aimlessly. Some sources suggest that they are ghosts of Danish women who never found rest after the Norman Talbot drove the Danes from Malahide.